NASHVILLE, TN (August 24, 2011) – Platinum recording artist Rodney Atkins is one of country music’s top hit makers and what better way to continue the winning streak than to follow him as he picks his top games on the popular SEC football fan site, www.southernpigskin.com. The site has engaged Atkins to be their celebrity game predictor, while offering fans a chance to get a little more insight into Atkins throughout the season. Atkins is currently sitting inside the Top 10 with his fastest rising single to date “Take A Back Road” from the upcoming release of the same name on October 4.

“We are honored to have Rodney picking games with us,” says Southern Pigskin publisher BJ Bennett. “Rodney and his music are as much about the southern culture as football is in the south. He touches people through the words in his songs. He is much ACC, SEC and Southern Conference as we are. He knows college football, especially the southern football leagues. He almost beat me. It’s going to be another wild and crazy year of football and we can’t wait.”

Rodney adds, “The energy of college football rivals that of a live performance for me. I am an extremely analytical guy and predicting these games is right up my alley, especially with a little luck thrown in. It is even more fun when I am winning and I have to say, I have fared quite well in my predictions. This season is going to be an exciting and unpredictable one and I look forward to seeing my winning percentage every week.”

Atkins played baseball in college and continues to coach little league when his schedule allows. He is in the midst of gearing up for a full fall schedule in preparation for his October 4th Curb Records release Take A Back Road, that will coincidentally take him to his hometown in East Tennessee later this week for a GAC “Origins” taping that is set to air in October. Then it is back to Nashville to shoot the video for the hit single “Take A Back Road,” with award-winning film and TV director Andy Tennant (Sweet Home Alabama, Ferris Bueller’s Day Off, The Bounty Hunter and many more), before heading back out on tour. 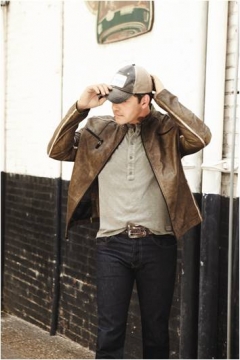